Halloween is a mere 18 days away and I need to get my act together and whip up a costume for my son. I love autumn but always dreaded Halloween, especially the older I got. My earliest memory of Halloween was dressing as Caspar the Ghost, wearing one of the nylon parkas with that god-awful plastic mask - you know, the one with the cut-out eyes, 2 nostril holes, and that piece of elastic that goes around the back of the head. I HATED those costumes. The only other costume I remember was being a gypsy in which my mom had made the skirt.

I always struggled to come up with a creative costume and it only got worse as an adult. Having a career in theatre and the performing arts, everyone expected me to have a kick-ass costume at adult costume parties. They just assumed that I had access to the theatre's costume shop and had my pick of the litter. That was not the case and I would have so much anxiety over having to dress in costume at parties around Halloween that I just stopped going to them.

Now that I'm a parent I don't want to just pull something off the rack for my son to wear. So now I've traded in my anxiety over what I will wear for Halloween to what my son will wear instead. Great. I try not to let it get to me since I know that Simon isn't really going to care if it's not perfect, but I set a pretty high standard last year when I made an adorable sheep costume using a men's sweatshirt, a fleecy hood from a thrift sweatshirt, and some synthetic poly-sherpa fabric. 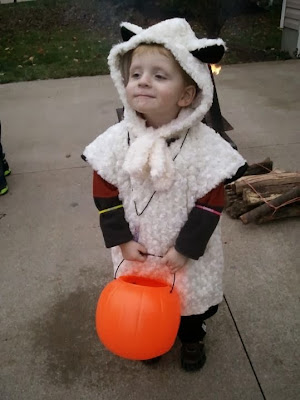 That was the year of Word World, better known as "Sheep & Dog" at our house.  This year Simon is really into Disney Junior shows, thanks to us having to have cable for the first time in over 2 years. Our cable DVR is almost completely filled with Chuggington episodes. He also likes Jake and the Neverland Pirates. My main criteria for a costume for Simon is that it be comfortable. I really can't think of any way to make a train costume that he would be willing to wear so I'm going to attempt to make him a pirate for Halloween. Now comes the mad dash.